Greetings. A month late, I know, but things are busy in my little corner of the world.

Here you shall see digital representations of the artwork that is up until the 31st at Side Street Espresso in Anchorage, as well as a small blurb about each piece. Please excuse the lack of a truly scientific explaination - I leave that to the REAL brains, Scott and Zack. 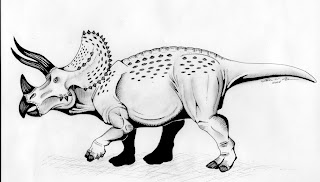 Triceratops Horridus. This curious critter was among the last of the great dinosaurs before the K-T extinction, and probably one of the world's most familiar, indeed synonymous with the word "dinosaur" to the average person. A great muscled hulk that seems part parrot, part angry, scaly cow, with a curious array of weaponry and sheilding. Apart from the large bony frill that did well at protecting the herbivore's jugular, Triceratops also sported several hard, bony protrusions called scutes (think crocodile skin), impressions of which have been found in some fossil formations. 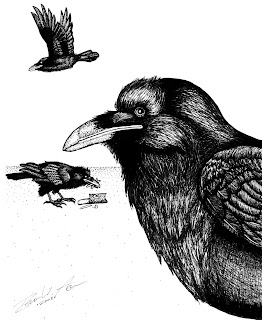 Corvus corax. To most people, these are the "pigeons" of Alaska - numerous, brazen, and all too happy to mob you for tasty golden french fries. Some may see them as a nuisance. Some don't even see them at all - just another blip in the background noise of arctic life. As one may guess, I have a different view of these birds. The blood of gods course through the veins of these "simple scavengers" - the Tlingit sensed this and beheld this bird as a force of creation, responsible for the accidental creation of mankind.

They really weren't that far off. While most may scoff at the mystical explaination, consider the scientific one. Birds, such as our black feathered friend here, are decended from a lineage far older and terrifying than ours. From a time when mighty titans strode across a world far different from the one we are familiar with. Their very footsteps shook the earth, and even the mightiest trees would bow to their vast strength.

Tupandactylus imperator. One may call this strange creature "Prince", if only for the fact that this is the pterosaur formerly known as Tapejara imperator. It was previously thought that this was a relative of T. navigans, a shore-dwelling pterosaur made famous by the "Walking with Dinosaurs" BBC series, and T. wellnhoferi. All three sported some interesting headgear, but that was as far as the similarites went. Not much else is known about this royal reptile, other than it had a H-U-U-U-U-U-U-G-E crest on it's noggin. It's purpose is unknown, but one can assume that it was used for display. However, with what effectively equates to a large sail on it's head, it's unlikely to me this strange bird-like creature could actually fly, despite how he's posed in the picture. The big, heavy beak resembled that of a wrinkled hornbill, which is where my color pallete came from.
at 8:05 PM

YAY! I'm linking to this post right now in all the other entries!

Oh, don't worry, these suckers could fly. However, they were also well-adapted to a ground-foraging existance. Of all the pterosaurs, tapjarids and azhdarchids were the most terrestrial.

People to "Crow" About

Why Does The Boxed Bird Caw?