If you are in Homer, AK during the month of April, come check out the show at K-Bay Caffe on Pioneer Avenue, next to The Grog Shop. Opening reception will be tonight at 6 p.m.

----
In other somewhat related news, a version of "Swamp Dragon" is now available through the Neatorama blog's "Neatoshop" as a high-quality t-shirt. Stay tuned for new designs!

A question I have often asked myself during my renewed interest in dinosaurs and paleontography is "what is a proper dinosaur resting posture?" I have seen many different artists portray dinosaur resting much like what you see in the Steve Kirk painting to the left, and John Conway's sleeping tyrannosaur painting in the book "All Yesterdays" - on their sides, lounging like lions, or in this case, like a tuckered-out kangaroo. But is this necessarily accurate? Could dinosaurs, in fact, lounge in this way?

I am skeptical of this -"lounging," as is depicted here, is something that I've found in my studies (admittedly limited in comparison to some of my readers) to be a distinctly mammalian trait. Crocodiles, birds, and squamates do not, in my experience, exhibit this kind of resting behavior where they lay upon their sides, with the majority of their weight upon their ribcage, hip, and tucked-under leg.

Birds have a variety of sleeping postures and habits ranging from snoozing standing up (sometimes on one leg!), to nesting with both legs folded up under the body, to perching - or, in the case of some hummingbird species, hanging upside-down like little, feathery bats. Their heads are either tucked behind the wing, or pulled into their bodies with their beaks resting on their chests.

Crocodiles and squamates "lounge" in a different fashion from birds, but still do not have the same kind of world-class lounging skills that a mammal, like a dog or cat, does. Both clades typically rest flat on their bellies, with legs splayed out to the sides, sometimes with their bodies looping around upon itself to conserve heat.

I am curious as to what my readers think - based on the behaviors of these dinosaur kin and cousins, is it still possible that dinosaurs could still lounge in the fashion of leopards, lions, and lemurs? Feel free to leave comments below.
at 2:24 AM 9 comments:

I know, it's been awhile and I still haven't posted something on my blog here about the art show in January. I did want to do a quick update and post my second entry for Irregular Books' "All Yesterdays" art contest (entry #1 being my "Swamp Dragon" icthyovenator painting). 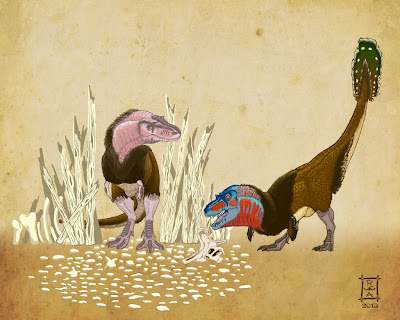 X-posted from my DeviantArt page:

I title this piece "Lesser Bowertyrants" - it depicts a courting pair of Gorgosaurus, with the male displaying his mating colors and feathers, offering his potential mate a Lambeosaurus skull trophy. The bower is an "avenue" type bower, with carefully arranged driftwood logs and scavenged bones on either side of a narrow aisle festooned with stones, bits of wood, and chunks of vertebrae - anything that is white or light in color. Other bowertyrants, such as the "Greater Bowertyrant", or Tyrannosaurus rex, create their bowers from strategically gnawed trees, adorned with the decapitated heads of triceratops or other prey animals. All species are able to cannibalize the more edible parts of their bowers in times of drought or famine, deriving an extra shot of calcium from the bones therein. Indeed, it is the very reason the male offers the choicest bits to his would-be mate - the extra calcium in the offered bones allows for better egg production and a healthier brood.

I had originally planned on adding additional sketches of other species of bowertyrant, including T. rex (greater bowertyrant), Albertosaurus, and the more distantly related Tarbosaurus, but time got away from me. As you can see from the sketch on the left, the greater bowertyrant's "love palace" is quite different, and more grim, than it's smaller cousin's, inspired in part by the Nature article on how T. rex may have butchered his Triceratops prey.

In other news, Scott Elyard and I will be putting on an art show in Homer, AK next month. More on that soon. 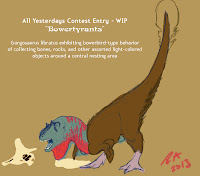 Something to fill the gap while I draft something up for a synopsis of our show opening in Anchorage this month.

I give you Gorgosaurus libratus - or as I am calling here, the "lesser bowertyrant" - in wild turkey livery, puffing up for an as-yet-painted female, showing off some choice items from the collection of bones, stones, and driftwood that make up his bower.

I will include other notes and sketches detailing the gregarious behavior of young males, banding together to bring down large game to add to their collections, and how as they age, they become more solitary and confrontational, choosing to stick around their home territories. Thievery and vandalism is rampant among neighboring mature males, and such acts often lead to violence, injury, or even death if the neighbor happens to be caught in the act. The strongest and most ferocious may even display the skulls of their bested rivals - a surefire way to impress a potential mate.
at 6:59 PM No comments:

Ichthyovenator laosensis - the fish-eating hunter of Laos, known only from a single type specimen found in the Aptian age Grès supérieurs Formation. Siamamia, a Cretaceous cousin of the North American bowfin fish, is known from similarly aged rocks in the Sakon Nakhon Province of Northeastern Thailand.

Siamamia Has A Bad Day

#10colockart (the "it's 10 somewhere" edition) - Closeup of facial details of Ichthyovenator and the work done on the Siamamia in its jaws. 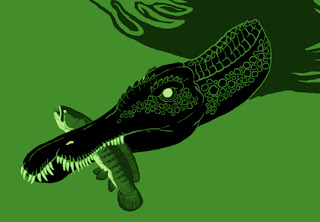 #10oclockart Ichthyovenator/Pisces. I just might be able to finish this in time for the show! 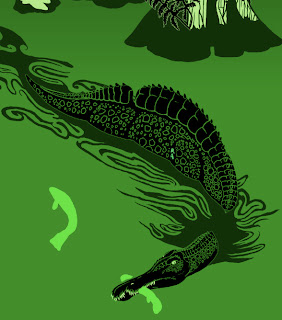 A somewhat fanciful (see, Zach? I called it "fanciful"!) representation of the spinosauroid from Laos, known only from a pelvic girdle and a few bits of vertebrae. The fossil shows a strange, dual-hump configuration, with flat, paddle-like neural spines that abruptly reduce in size at the joining of the hips with the trunk of the body.

This is the "finished" version of Conchoraptor that is going in the upcoming Archosaurs and Automata art show. Eventually I will return to this and add in the missing elements to the painting to bring it back in line with the "Dino Zodiac" project.

The crab in its claws is purely speculative, given there is no fossil evidence of hermit crabs found in the Nemegt Formation. The shell that it inhabits, a species of Viviparus, is known from the neighboring Dohoin Usu fossil beds to the north, which are of a similar age to the Nemegt formation (Late Cretaceous).

Special thanks to Jamie Headden for the pointers on oviraptor anatomy, and to Scott Elyard for helping to keep me sane.

P.M. entry for #10oclockart - sunrise over the Nemegt River Delta of Cretaceous Mongolia. 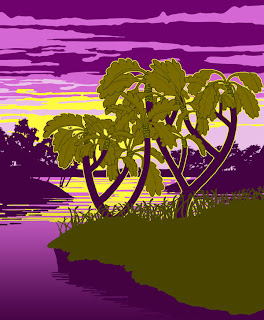 Flora from the Maastrichtian era Nemegt Formation is spotty at best, but existing fossil evidence shows that there was some form of forest cover in the form of Pseudolarix conifers, with some hypothetical Baikalophyllum cycads and reedy plants thrown in the mix (known from similar localities in China and Russia).


The Indiegogo campaign for the upcoming "Archosaurs and Automata"art show is over, and while we only made 60% of our goal, Scott and I are still looking forward to putting up one awesome art show this January!

After talking with Jaime Headden of "The Bite Stuff" blog and showing him my progress so far on the Conchoraptor, I received some very helpful advice and pointers on the anatomy of this very strange theropod. I've also begun work on the poor, helpless creature in her claws - a hypothetical freshwater hermit crab that has taken up residence in the shell of an ammonite (like this guy).
at 11:44 PM No comments:

People to "Crow" About

Why Does The Boxed Bird Caw?